I am an evolutionary biologist trained in bioinformatics, field ecology, and behavioral research. My research is driven by my fascination with the evolutionary processes that generate diversity in wild populations. This research includes projects on birds, mammals, and fish from the Americas, Eurasia, and Oceania.

I am working as a Postdoctoral Researcher in Genomics and Bioinformatics in Leif Andersson’s lab at Uppsala University. I previously completed my Ph.D. at Tulane University in Dr. Jordan Karubian's lab and recieved my bachelor's in biology from Colorado College.

Genomics of the Darwin’s Finch radiation 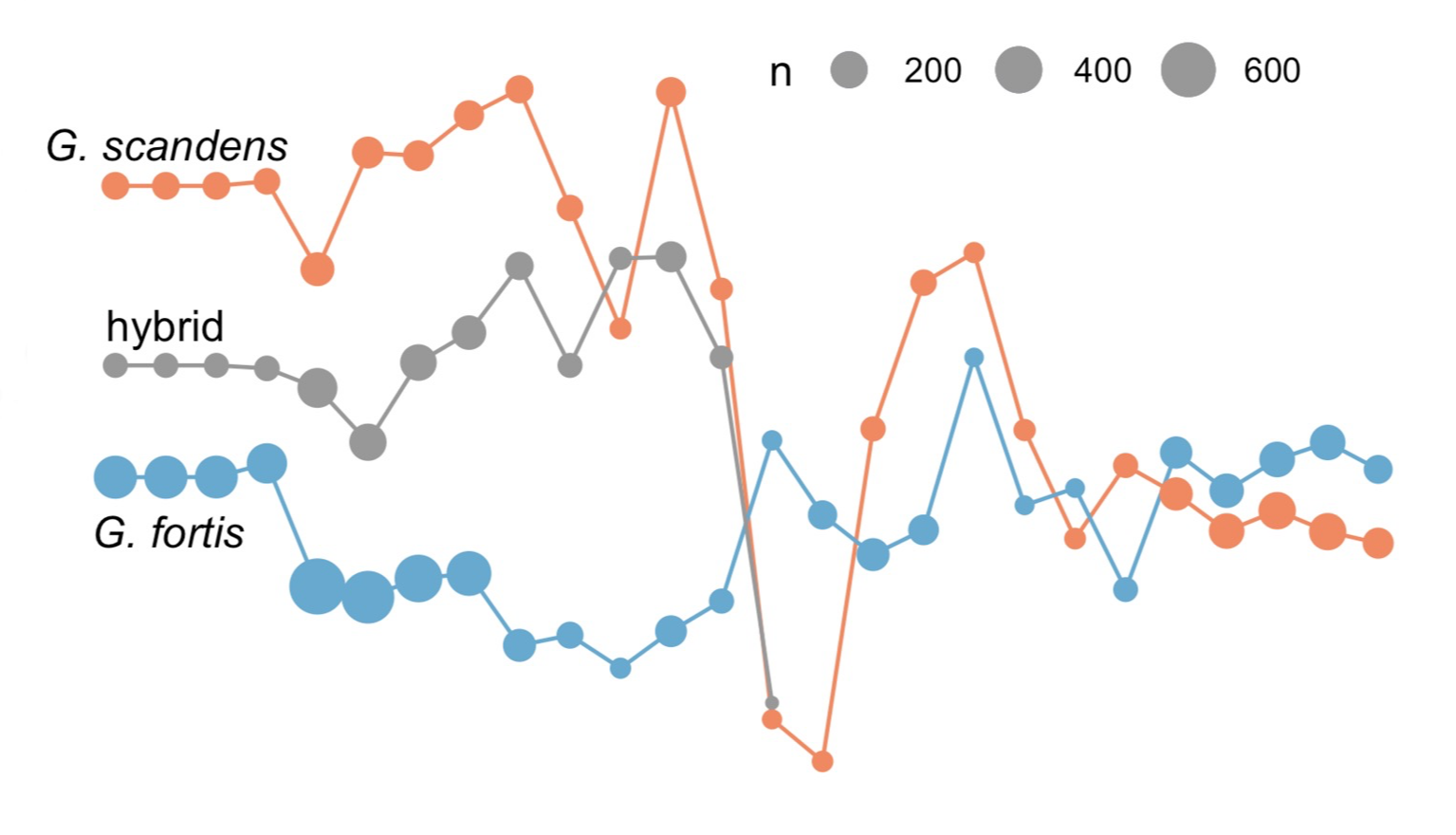 My postdoctoral research primarily focuses on the proximate mechanisms for how selection functions at the population and individual levels in the radiation of Thraupidae finches on the Galapágos Islands. The basis for this research has involved the generation and analysis of 4,000 Darwin’s finch genomes derived from individually marked finches collected over 40 years on Daphne Major by Drs. Peter and Rosemary Grant. This project required the development of methods to use low-coverage (2x) data to estimate population allele frequencies from wild populations. Using this dataset, we can identify and track through time functional variants related to natural variation.

Evolution of female ornamentation in the White-shouldered Fairywren 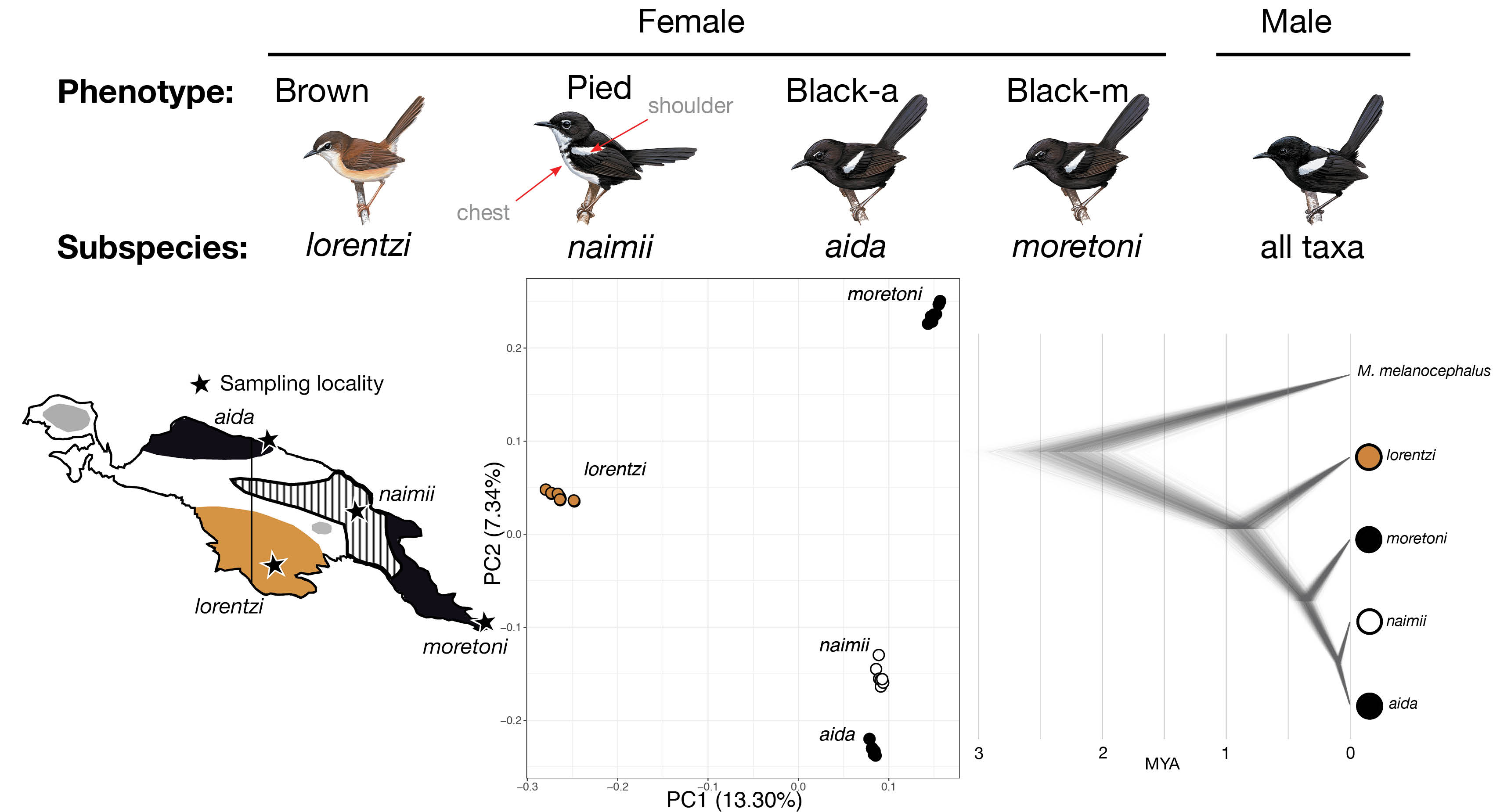 Ongoing work in this system is unraveling the evolutionary history of the various White-shouldered Fairywren subspecies, examining evidence for selection on female ornamentation using genomics, and understanding the proximate mechanisms shaping signal production. Much of this work was generously funded by an NSF Dissertation Improvement Grant.

In many marine fish systems huge population sizes provide a powerful model for population genomics analysis aimed at understanding how populations adapt to different local environmental conditions. In one study, we described a recent selective sweep driven by a missense mutation in fish rhodopsin that facilitates adaptation to the red-shifted light environment in Baltic Sea herring and has occurred >20 times in other fish transitioning to freshwater environments. In contrast to the Atlantic Herring, the European eel exhibits an unusual life history where breeding occurs in the central Atlantic Ocean, but all adults spend their life in continental Europe in environments ranging from warm to cold and brackish to freshwater. Considerable disagreement in the literature has failed to demonstrate if continental eel populations represent a single panmictic population or consist of populations locally adapted to their environment. We use whole genome analysis from hundreds of individuals to solve this enigma and were able to compellingly demonstrate that the predominant mechanism that allow eels to inhabit diverse environments is plastic and not genetic.

In collaboration with Per Alström and colleagues I use genomics to study the evolution of plumage coloration in Motacilla wagtails. This group of colorful passerine birds are common across Europe, Asia, and Africa. Several species are charecterized by large variation in plumage coloration, but little genetic divergence. We leverage these features to study the processess that have generated such dramatic variation in plumage signals.

I have led or contributed to the generation of novel resources for genomic studies on non-model species. These state of the art genome assemblies are chromosome scale and include high quality genome annotations.

I have given talks at numerous international conferences about my research on evolutionary biology, behavioral ecology, and genomics. Please send me an email if you are looking for a seminar speaker on any of these topics!

Research abroad is made possibly through working with local communities. I have worked with local communities in New Guinea to advocate for and develop a locally led group dedicated to grassland conservation. In New Guinea, the goal of our project was to support the idea that conservation is not just for the community, but by the community as well.

Watch a video summary of our work in Garuahi, Milne Bay Province: